This is a simplify version of the Brazilian “pão de queijo”, it is cheesy and gluten free.  It makes a great appetizer and can be made way ahead. 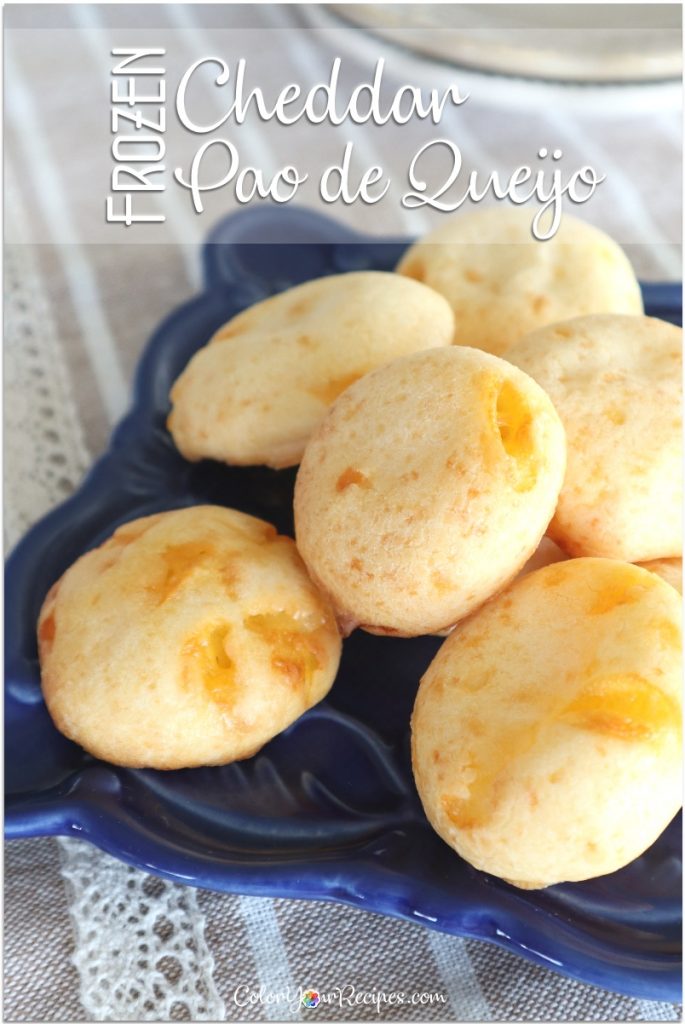 I already share so many versions of the famous Brazilian pão de queijo…recipes which each little ball is hand shaped, blended and pour in a waffle iron, Asian style and now blended and frozen for later enjoyment.

Pão de queijo when translated from Portuguese should be cheese bread. In reality, it is not a bread as you know as bread…it is usually small baked roll with cheese and the base of the roll is mainly tapioca flour and not wheat flour. The texture is not like your regular bread, it is sort of chewy, cheesy and let’s say very different. In my opinion it is a sort of popover, choux pastry…there is no any raising agent such as yeast or baking powder, the air pockets in the little cheese bread are mainly due to the combination of egg, oil, liquid (milk) and tapioca flour.

Pão de queijo recipe is typical from Minas Gerais, which is a state located on the eastern side of Brazil, north of the state of São Paulo. The recipe is traditionally passed from grandmother to their daughters and from the daughter to the granddaughters…the difference in the ingredients may vary from water to milk, oil from lard, but the idea is the same. Apparently started with a piece of leftover cheese, since wheat flour was not common at the time being that tapioca flour from yuca (cassava) was available, somehow in between “pão de queijo” emerged.

Because is it easy and a crowd pleaser.  I always have a “bag” of these in my freezer…and I bake whenever we feel like having a small snack, a something to go with a bowl of salad or soup, as an appetizer when entertaining.

– Why this is a great version?

This is the simplest version of all and can be made way ahead…all the ingredients are mixed in a blender and pour is a small silicone mold and place into the freezer. Once frozen they can be stored in a plastic frozen bag (to save freezer space) and store for months until time to bake.

– Have I convinced you? Okay…let’s look at the recipe… 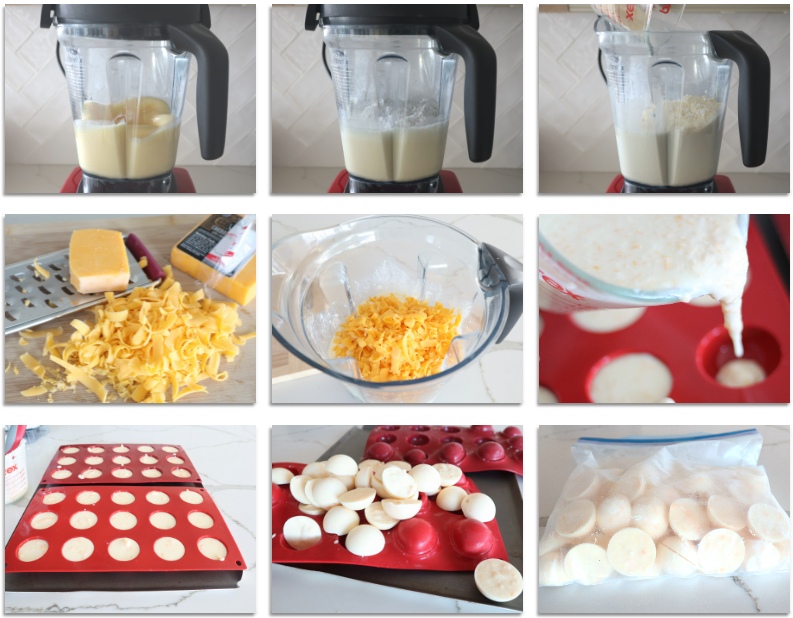 Place milk, oil, eggs and salt in the blender. Blend until all the ingredients are mixed.

Add the parmesan cheese and blend in.

Add tapioca flour in thirds and pulse after each addition, making sure that the batter is smooth. Scrapping the side of the blender cup as needed.

Pour the batter into small silicone mold (approximately 0.6 oz or 18 ml each cavity). As the silicone bakeware are flexible, place them on a cookie sheet or any metal tray.

Place the trays in the freezer for a few hours until the batter is frozen.

Once the cheese bread (balls) are totally frozen, quickly remove the frozen cheese balls from the silicone bakeware and place them into a freezer bag and in the freezer until time to bake. 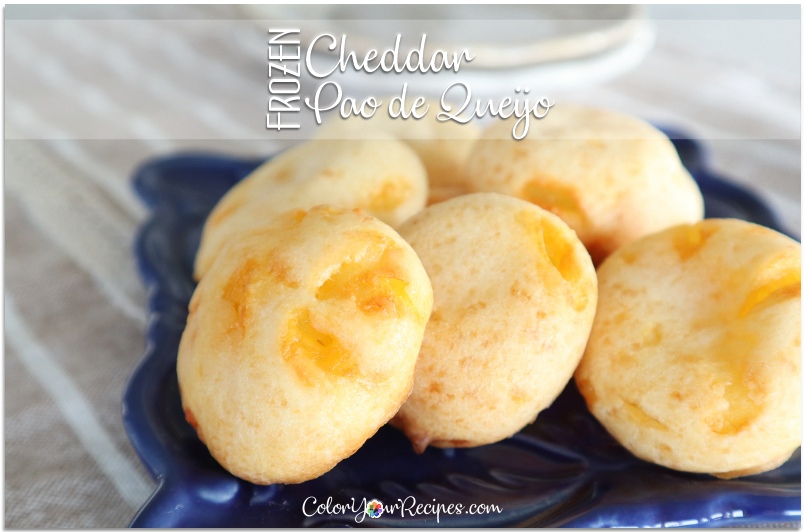 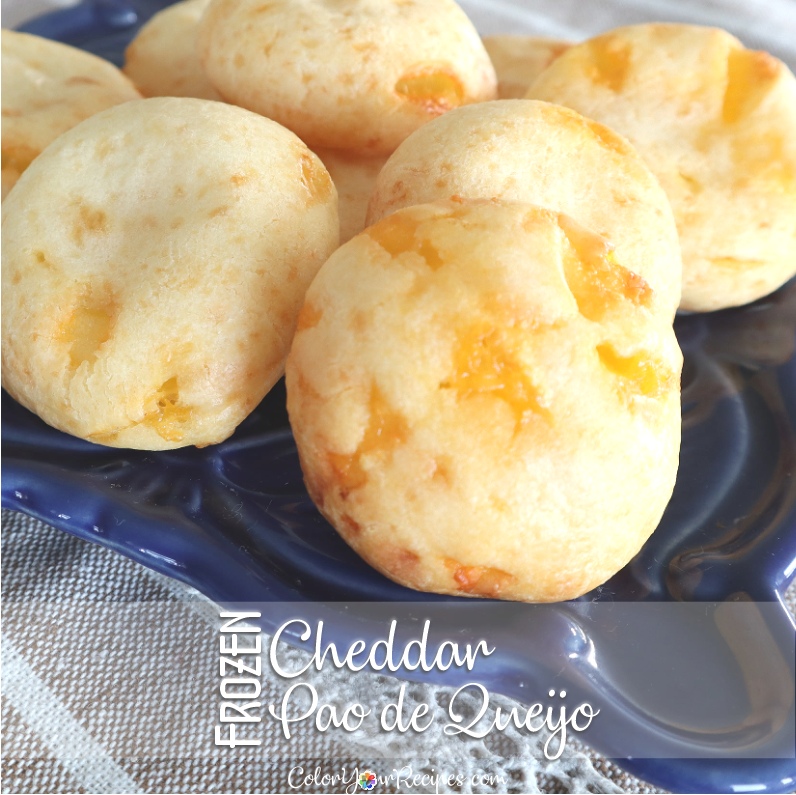 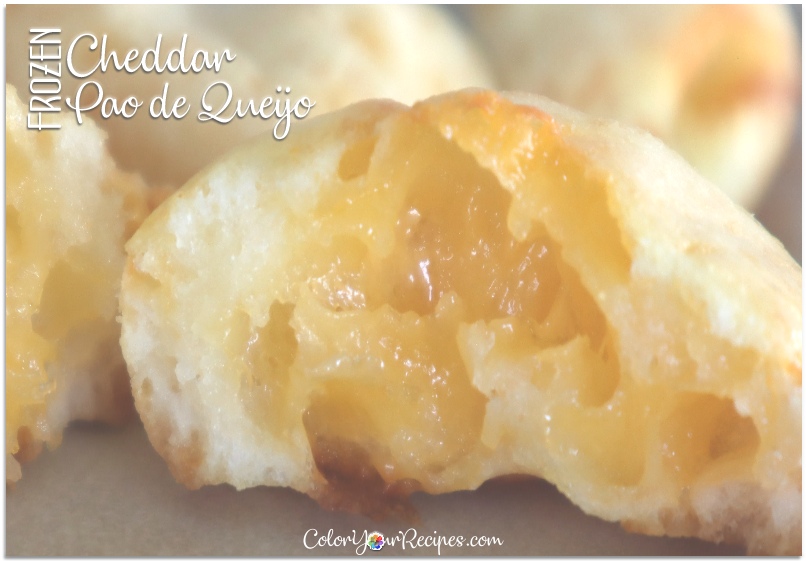 – Looking for other versions of the Brazilian pão de queijo?

Did you know that tapioca flour is a product of the cassava? Cassava, yuca or manioc is a root like yam, taro,  and potato, therfore totally grain and gluten free. Cassava is  very popular in South America, parts of  Asia and Africa.