If coconut is your thing, you will love this recipe of double coconut cake.  It is coconut in every layer of this cake. Creamy coconut cream in between moist coconut cake. 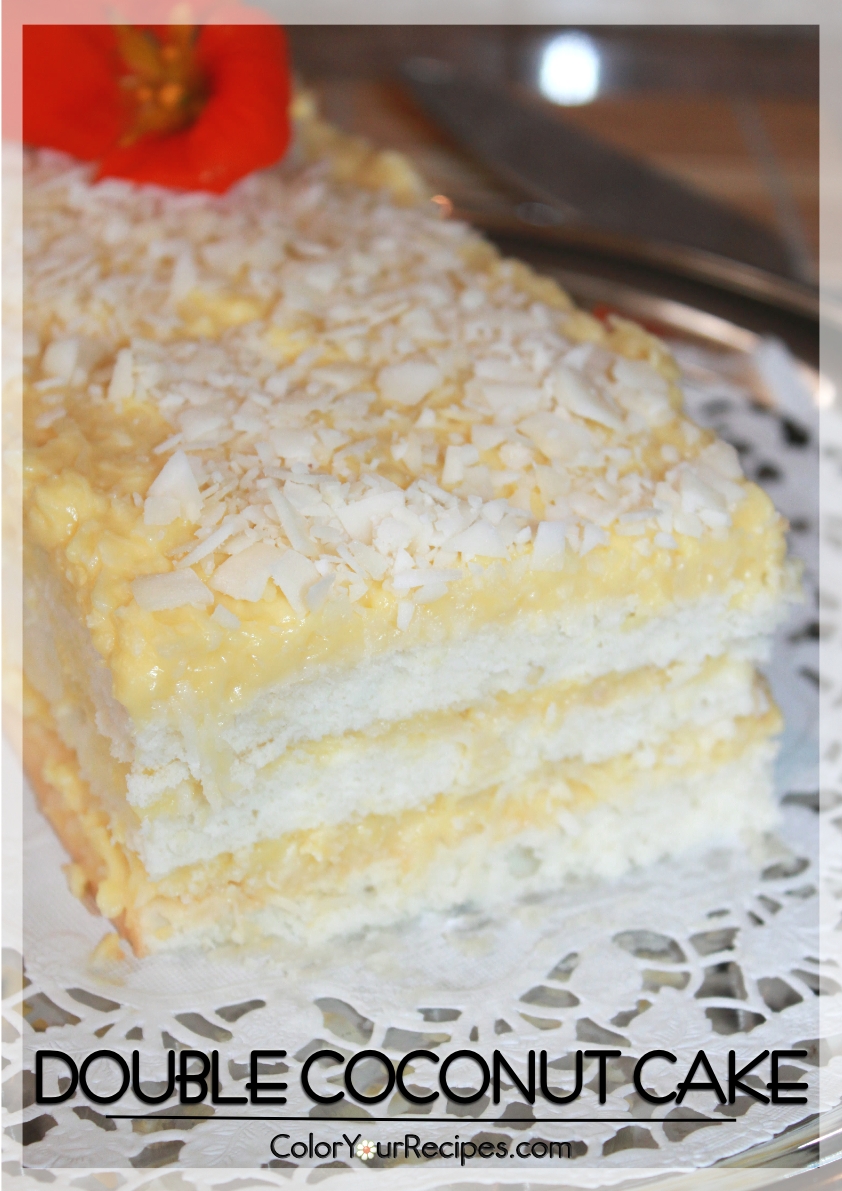 I love coconut, but somehow I do not bake often with it…cannot explain…well…I just put an end to it with this double coconut cake. Double?  Yes, there is coconut milk in the white cake and coconut milk as well as shredded coconut in the filling.

This cake was adapted from Desserts Magazine, Issue 13, I halved the recipe and instead of using round pans, I used a jelly pan, cut into three and layered making a rectangular cake. The original recipe has a third layer of frosting, I decided to skip and just covered with more coconut pastry cream and coat with toasted coconut to give some crunchiness.

The size of this cake is just perfect for a small gathering or for an intimate dinner. By not covering the whole cake, exposing the layers, make this cake very…very…I don’t have the word for it…but somehow elegant and rustic at the same time. 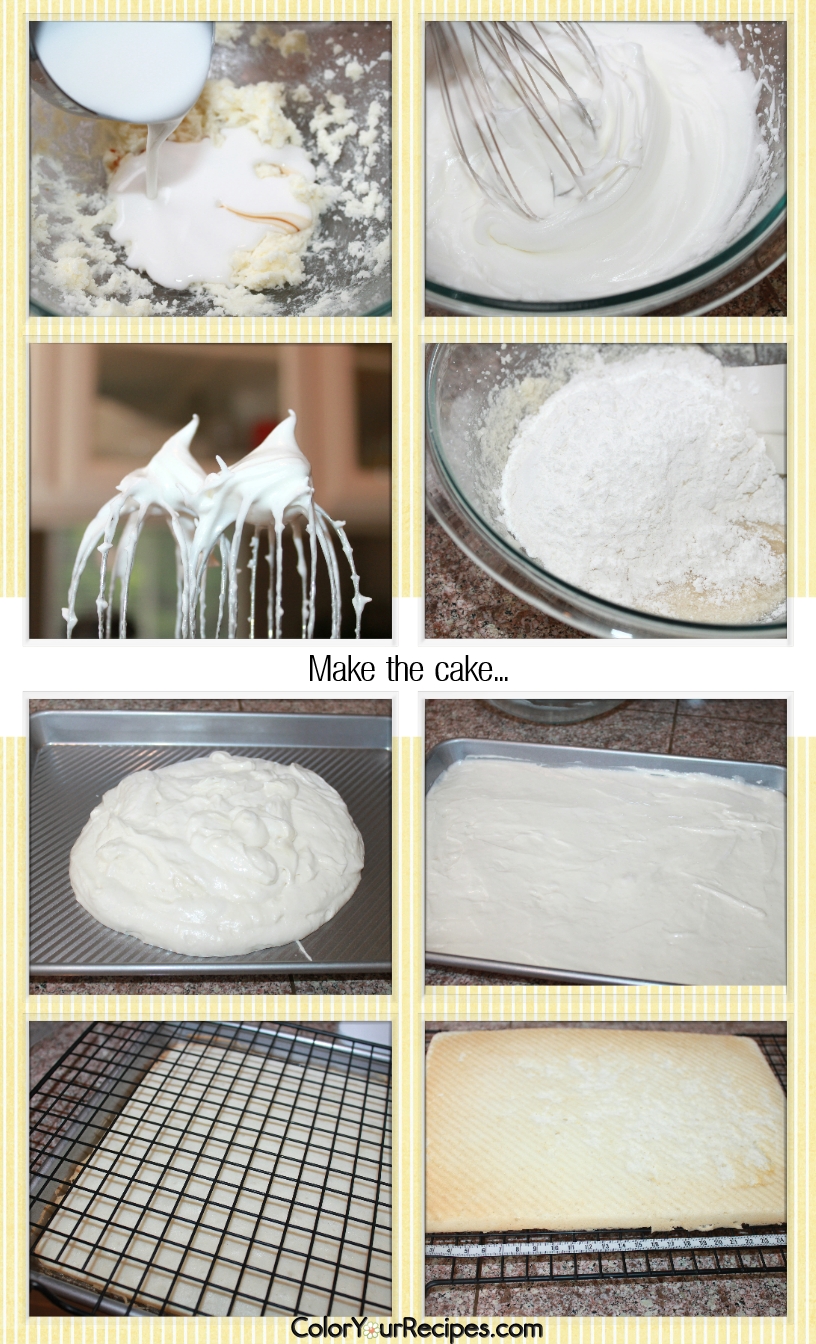 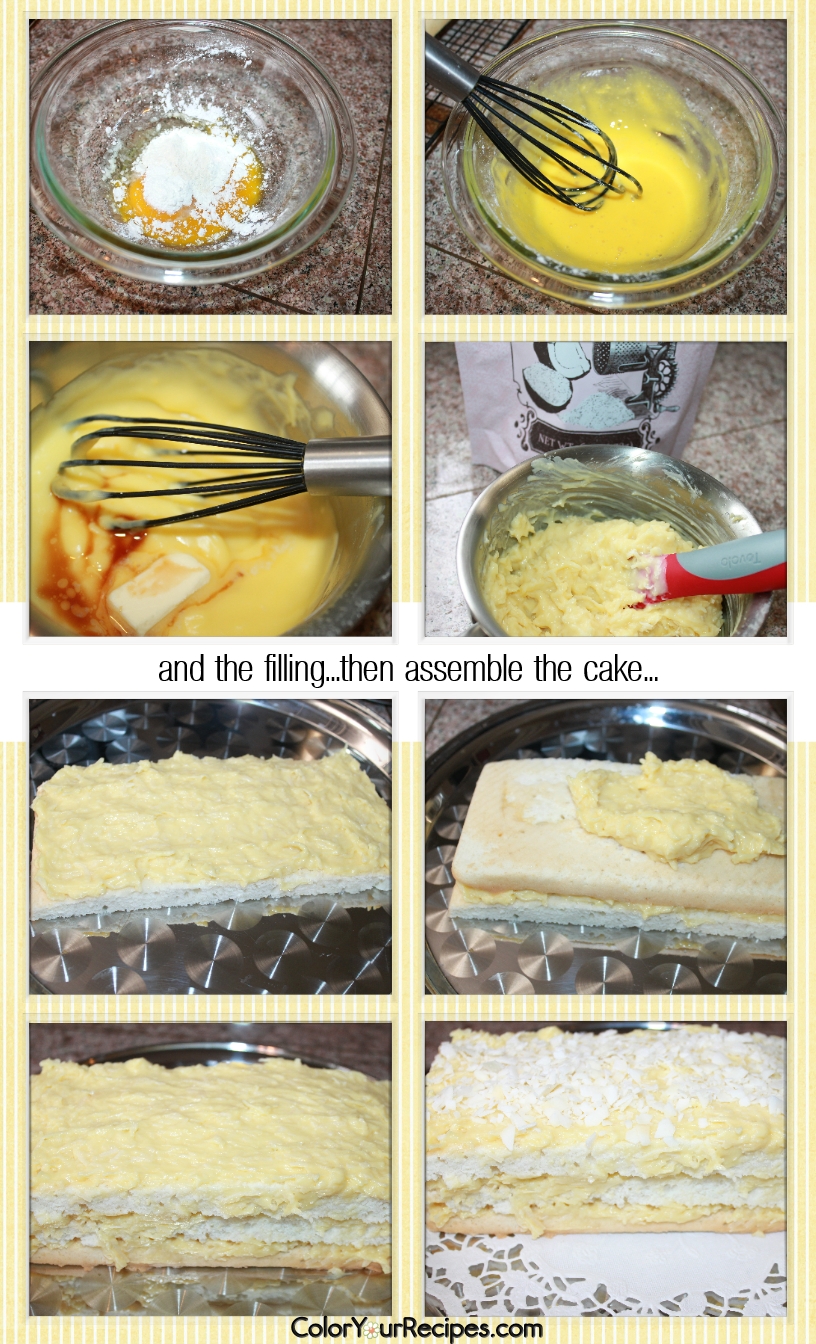 Sift the flour in a small bowl and add baking powder and salt.

In another bowl beat the butter with half of the sugar until light and fluffy.  Add the vanilla extract and the coconut milk, continue mixing under low speed. Add the flour mix and mix gently with a spatula, just until the flour mix is combined.

In a clean bowl, beat the egg white until foamy.  Add the cream of tartar and continue beat on medium high until soft peak forms. Turn the speed to high and slowly add the remaining sugar until firm, and glossy peaks form.

Spread the cake batter on the prepared jelly pan, smoothing with the spatula.  Bake for approximately 15 minutes or until a wooden stick inserted in the center comes out clean.

Remove the cake from the oven and invert on a wire rack. If parchment paper was used, peel off the paper and let the cake cool completely.

While the cake is cooling, in a small bowl whisk together egg yolks, corn starch and flour until a smooth. Set aside.

In a small saucepan combined the two milks, sugar and salt.  Cook until the mixture comes to simmer. Pour slowly into the egg mixture by whisking constantly.  Pour the egg yolk mixture back to the pan and cook over medium heat, whisking constantly until it thickens and comes to a boil. Remove from the heat.

Add vanilla extract and butter, mix gently until the butter melts. Add the shredded coconut and mix until well combined. Place the cream in a bowl and cover with a plastic wrap, press it onto the surface to prevent a “skin” top form. Let it cool and refrigerate until chilled, at least 2 hours.

Divide the coconut pastry cream into approximately 3 portions. Cut the cake into 3 identical size and spread one portion of the cream into the first layer of cake, alternate with the cream and cake layer and finish with a layer of cream. 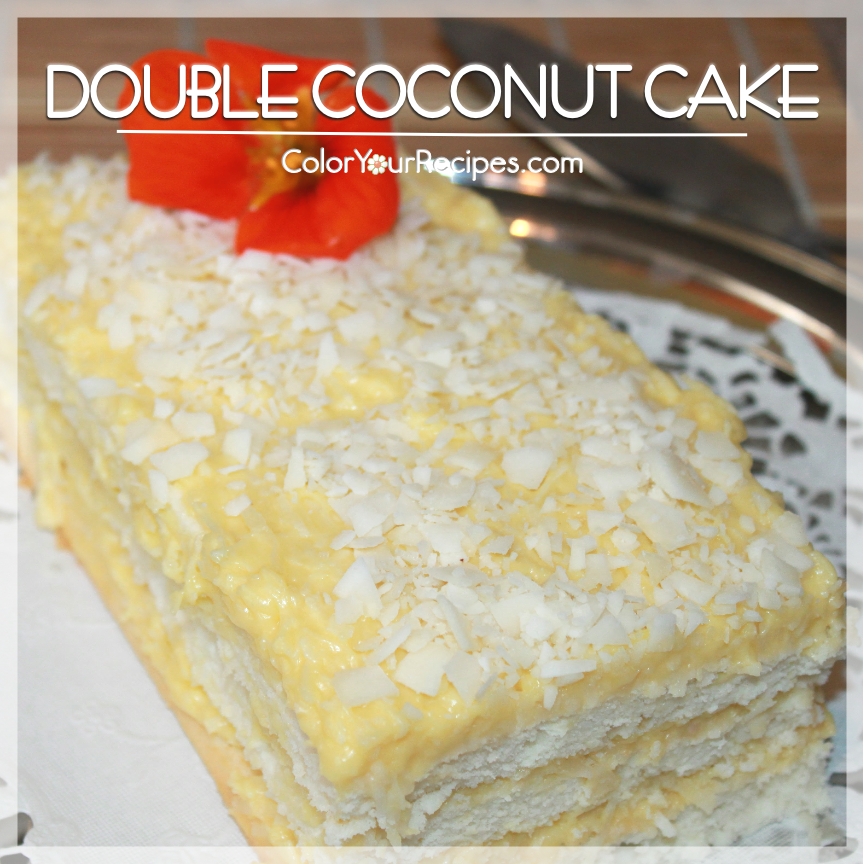 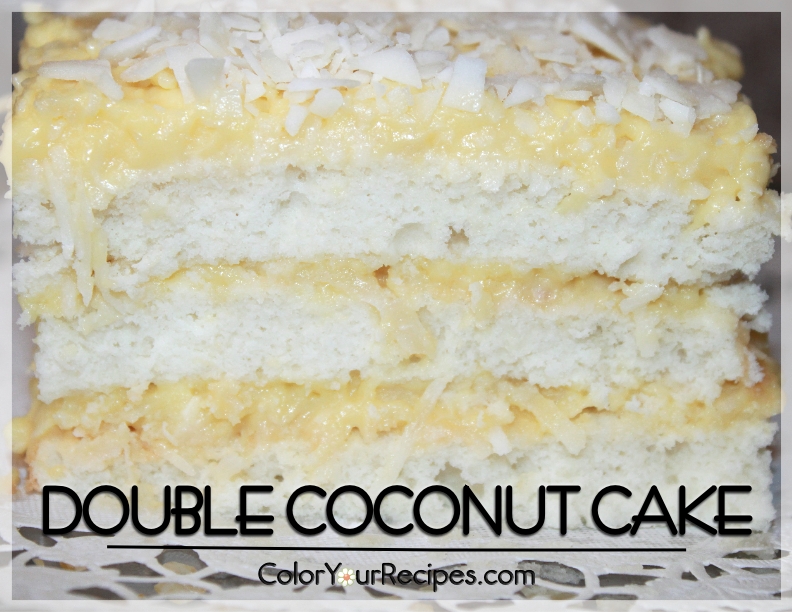 If you enjoy this delicious double coconut cake you might want to try An Asian inspired dessert for Pandan Infused Coconut Milk with Sticky Rice.

Thank you for visiting Color Your Recipes…have a colorful week !